i've had a funny old week
actually there was nothing funny about it it was bittersweet.
my son finished pre-school /nursery this week as he starts big school in September. On tuesday at pre-school i was given his scrapbooks to take home - if we like we can give them to his new teacher to read. I looked through them as soon as i got home, they were lovely and captured the personality of my son, lovely examples of his work, funny little things he'd said, great photo's of him enjoying school life with friends and teachers, i was left with warm fuzzy feelings and little proud tears in my eyes.
***
On Wednesday i took him to Nursery {he goes to two different settings to get his whole five session entitlement} i was handed his transition document to read and sign, this document would then be sent on to his new school to show what developmental level he is at, as i began to read it in the busy nursery enviroment little alarm bells were going off in my head, i said i couldn't concentrate and would take it away to read and sign at home.
What a difference a day makes the warm fuzzies were replaced with a sick feeling in the pit of my stomach and floods of angry tears, i could not believe the crap i was reading, i made my partner read it too and he was angered by it too. My son has slight speech and language difficulties he has help at school and has been attending a weekly workshop and is improving greatly. The nursery have really dwelled on this in the transition document and it was really negative reading - basically it said his speech problem was alienating him from his peers and that he was a fringe member of the group, it also said he finds it difficult to effectively engage with adults, a lot of his "grades" put him at a 22-36 month level.
Now none of this is true it was ridulous reading - his key-worker has obviously not made an effort get to know him properly and that made me so sad as he's been there for 14 months, luckily he has loved his time there and was very sad when his last day came, it was hard for me to send him in after reading that report to be honest. On his last day i took in a two-page letter voicing my concerns, told the worker i wasn't signing the document as i wasn't happy with what had been writen, i was offered a chance to discuss it but declined, mainly because i was still pretty tearful thinking about it and took home his "learning journey" book to read there were about five pages in it, they weren't negative but fairly bland. I'm waiting for a response to my letter.
***
The transition document from pre-school was very positive and in several catergories marked him at ELG {early learning goals} which put him beyond the level expected at his age. Not that i care what level he is at - i honestly don't but he should be represented accurately.
Anyway - i'm sorry for that very rambling and personal post but i just needed to get it out of my system if you know what i mean?
***

on a more cheery note they had an end of term "BUG PARTY" don't look at the photo's if you are scared of bugs! 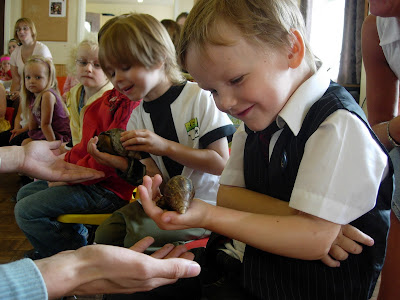 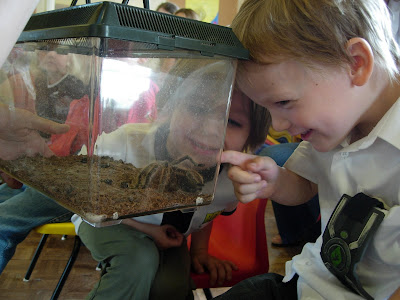 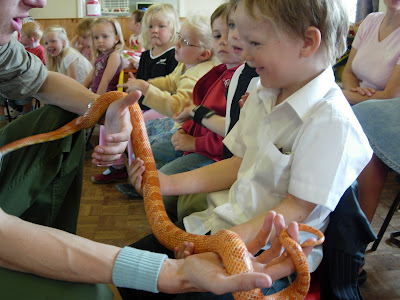 i held this snake too! 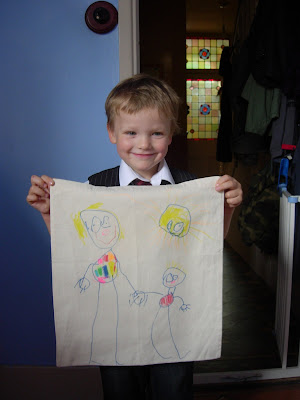 here is the bag my son made for his teacher 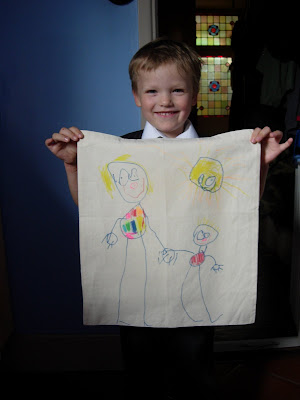 he was very proud of it 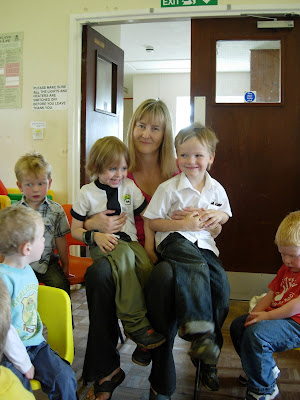 and here he is with his lovely key-worker at pre-school who made the lovely scrapbooks that gave me the warm fuzzies.
BIG BOY SCHOOL HERE HE COMES!
Posted by x vInTaGe VioLeT x at 23:35

Sounds so awful - two completey opposing reviews. Once he gets up to primary school he will be able to show what he's made of and you'll be able to put all this behind you. Good for you though for taking action and confronting an injustice head on.

I know we chatted about it at crafteroo and in yahoo thingy, but reading you post now has made me feel angry and upset for you.. maybe because of the trouble with H and the little sod on the close but it still makes me angry that they would comment that your lovely DS was being isolated by speakign diffrently.. that is just a load of crap they are trying to fob off... at H's school there are a couple of kids with learning difficulties but they are lovely kids and all the children play together quite happily, its really lovely to see. The children play nicer than the parents do in my opinion. I'm glad your DS had one good pre-school teacher, sometimes that can make all the diffrence.

OMG how awful, anyway if he had problems why did you find out so late on? Sounds like a load of rubbish to me. I totally agree with you they obviously didnt give him a chance you can tell by his drawing alone that he is a talented little boy.... and very cute :)

You have every right to be angry. If it was that bad why didn't they say anything before? Anyway you know the truth and have his book from the other key worker (who obviously knows her job). *hugs*

You are a nutter for holding those bugs! I had a nightmare about a snake last night *shudders*

That is so awful that the nursey key worker didn't take the time to get to know your son properly. Such a relief, though, that he had preschool to go to as well!
Love all the pictures - and there is NO WAY I would have held that snake!!

I really really loathe ELGs, and the way our children have to categorised, assessed and treated to tick boxes on a sheet.
Concentrate on the scrapbooks and not the tick box report type crap, and look forward to next year when he'll be a big boy in big boy school (and loving every second of it!)

Well, both my twin sons had speech and language therapy during nursery and their P1 year. I felt like you do, knowing what your child is really like and then hearing them described on some god-awful scale. I also thought I had failed them as a mother, it was something I had done, they had their own twin-speak which delayed them somewhat in wanting to converse with other children - in fact they started off by teaching their preschool friends the language!

They are going to start P4 in August (Scottish school hols are different) and both of them are ahead in Math and English and very good at science.

So although it looks bleak now I have to say that your little boy will find his own pace and excel at his own rate.